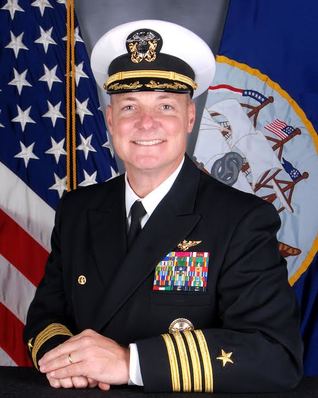 As an aircraft commander and instructor pilot in the E-2C Hawkeye and C-2A Greyhound, CAPT Bolt has flown with multiple VAW and VRC squadrons on both coasts and Japan and completed 9 deployments. He has accumulated more than 5500 flight hours in multiple aircraft types including the E-2, C-2, and F-14. He has successfully piloted more than 600 arrested landings on a combined total of fourteen aircraft carriers. He participated in Operations DESERT SHIELD and DESERT STORM aboard USS Theodore Roosevelt and was also forward deployed to Manama, Bahrain.

In addition to being a fleet E-2C pilot, Captain Bolt was a Landing Signals Officer (CAG LSO) where he regularly flew the F-14A on deployment. He later became the Officer in Charge of the U.S. Navy’s Landing Signals Officer School at NAS Oceana, Virginia. he earned a Master’s degree in Strategic Studies at the Naval War College in Newport, Rhode Island and graduated with distinction in June 2002. After graduation, he reported to VAW-120 in Norfolk as the Executive Officer.

Captain Bolt served as the XO and then commanded the Liberty Bells of VAW-115 flying from the deck of USS Kitty Hawk, home-ported in Yokosuka, Japan, from October 2003 to April 2006. While in command, CAPT Bolt was selected for the Navy’s Nuclear Propulsion Training pipeline in Charleston, S.C. He completed Naval Nuclear Officer training at the Office of Naval Reactors in Washington, D.C. in September 2007. CAPT Bolt served as Executive Officer, USS Nimitz CVN-68, from December 2007 to November 2009.

Captain Bolt commanded USS Dubuque, LPD-8, from February 2010 to April 2011 where he deployed to the 5th Fleet AOR. As part of CTF-151, his crew and embarked Marines captured nine Somali pirates aboard the Motor Vessel Magellan Star whereby freeing the international crew of eleven sailors.
He served as the Senior Military Assistant to the Assistant Secretary of Defense for Networks and Information Integration (ASD NII)/DoD Chief Information Officer from May 2011 to March 2013.