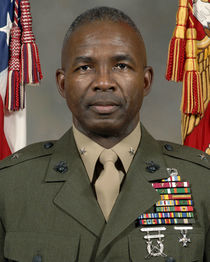 Lieutenant General Bailey was born in St. Augustine, Florida and graduated from Austin Peay State University, Clarksville, TN in 1977 with a Bachelor of Science degree in Biology. On 1 July 1977, he was commissioned a Second Lieutenant.

In August 1983, Lieutenant General Bailey returned to Quantico to attend the Amphibious Warfare School. After graduation in 1984, he joined 1st Battalion, 6th Marines at Camp Lejeune where he served as the Commanding Officer of Company C and Weapons Company Commander.
​
In 1987, Lieutenant General Bailey transferred to Kings Bay, GA where he activated the Security Forces Company, and served as the Guard Company Commander.

From August 1989 to June 1992, he served at Marine Barracks, 8th and I, Washington, DC as Department Chief, Professional Military Education and marched as the Parade Commander.

In June 1992, he attended Army Command and General Staff College. Graduating in 1993, he joined 2d Light Armored Infantry Battalion as the Executive Officer. From 1995 to 1997, he assumed command of the 2d Light Armored Reconnaissance Battalion.

From 2002 to 2004, Lieutenant General Bailey commanded the 2d Marine Regiment. From 2004 to 2005, he was assigned as the CMC National Fellow at the Council on Foreign Relations.

In July 2005, he was assigned as the Director, Expeditionary Warfare School in Quantico, Virginia. In May 2006, he assumed duties as Deputy Director for Operations, J-3 Joint Staff.

In July 2007, he assumed command of the 3d Marine Expeditionary Brigade, and concurrently began duties as the Deputy Commanding General, III MEF.